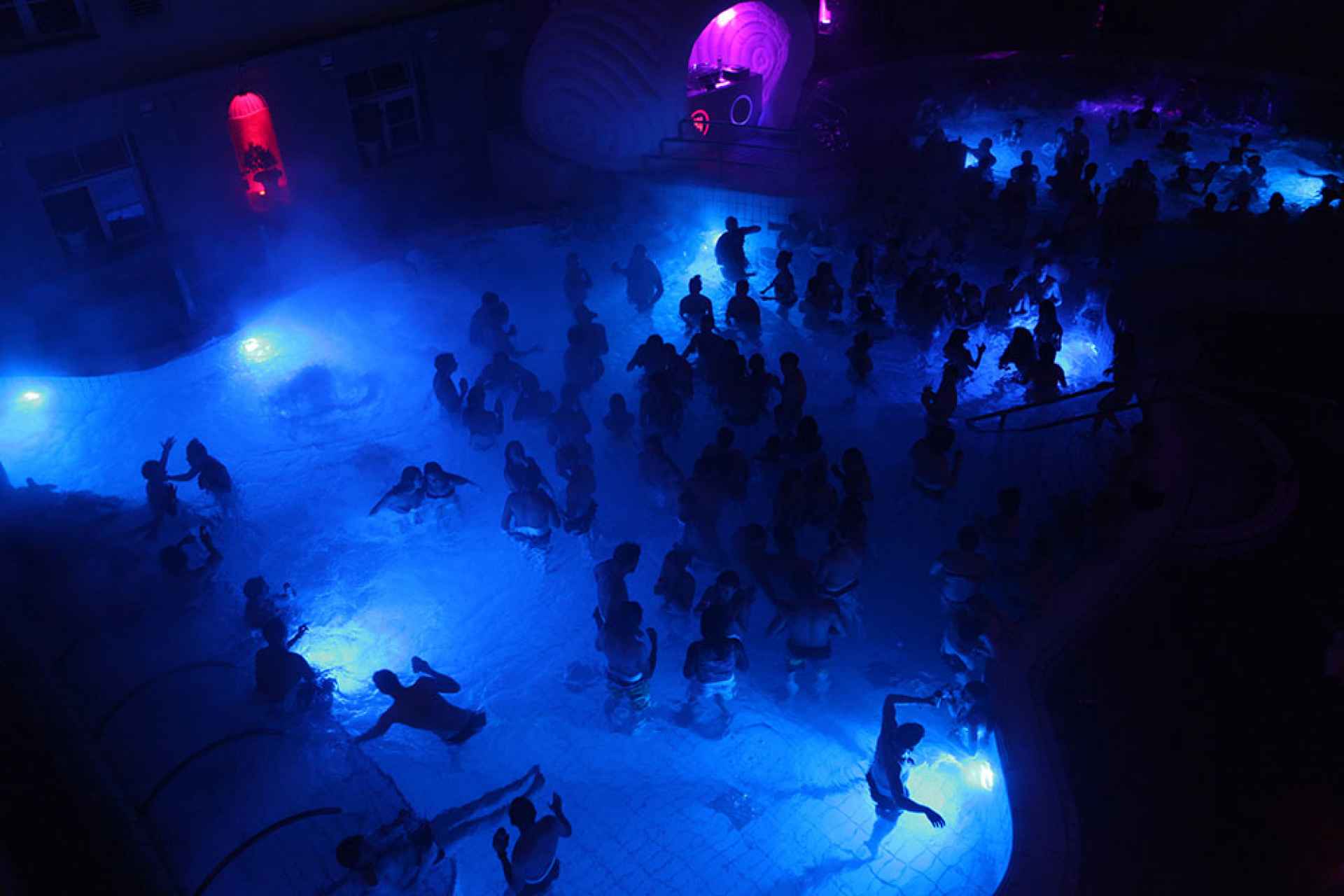 My bare shoulders, lower back and fully exposed butt cheeks are pushed up against the cool, rough and rocky wall of the pool as warm water laps around my nipples and I feel weightless as my thighs are easily lifted to wrap around his waist and gather him into me. Flesh on flesh. Breath heavy and every surface wet, not just from being in the pool. Running fingertips, nails, lips, and teeth along his collarbone, and shoulder, I open my eyes as he enters me, deeply and defiantly. I gasp and grin.

Out in the Open

To the right of us, a man is standing in the pool solo, hand on cock, watching us with a relaxed, pleasured look and half grin on his face. He seems satisfied with the scene unfolding, and we’re happy to oblige. While directly across from us, on the other side of the large rectangular expanse of water, a group of four men and two women are engaged in what I can only describe as a fantastical euphoric water orgy that involves one woman floating while numerous fingers, toes, tongues, and appendages are inserted into orifices and openings as she gasps, groans, and moans in utter ecstasy. And at the very edge of the pool, at the deep end, a gaggle of women treading water naked discuss their weekend plans, groceries, and various other daily errands.

It’s all wonderfully distracting while also being a huge turn-on.

Never heard of a swinger’s club? In essence, they are bars where nudity and public sexual acts are allowed and encouraged. They are for couples and/or singles that can either fully participate or observe, depending on your level of comfort and the experience you want to have.

That moment in the pleasantly warm water, as I was gently fucked against the pool wall, my swinger-club cherry was popped. This was my first time. I had no idea what to expect or how I’d react to everything going on around me. But I knew I was curious, and truthfully that’s half the battle.

Open in Every Sense of the Word

The other half is having an open mind and an even more open body. Now, that doesn’t mean opening your legs or sticking your dick in anyone who walks by. No, what I mean by that is being comfortable and confident enough in yourself to walk around, exposed, while others around you are doing the same.

Big, small, floppy, hard, soft, round, circumcised, scarred, flappy, hairy, smooth, tattooed, lumpy, taught; it’s all there and it’s all very much in your face — if you want it to be. I was absolutely fascinated at the human bodies around me. All the different skin tones, ages, shapes and sizes. The way people moved, interacted, touched, caressed and fondled.

Up another flight of stairs and we discovered a curtained “red room” made entirely of pillows. Like a large closet, there was only one way in and out of the room, through the heavy, red velvet curtains. One wall featured what looked like empty picture frames that were in fact two-way mirrors for the voyeurs having a romp inside the Red Room, and those who like to watch from the outside.

Dropping our towels at the entrance, we slipped through the heavy drapes — we’d found our next adult playground.