The Paradox of Polyamory 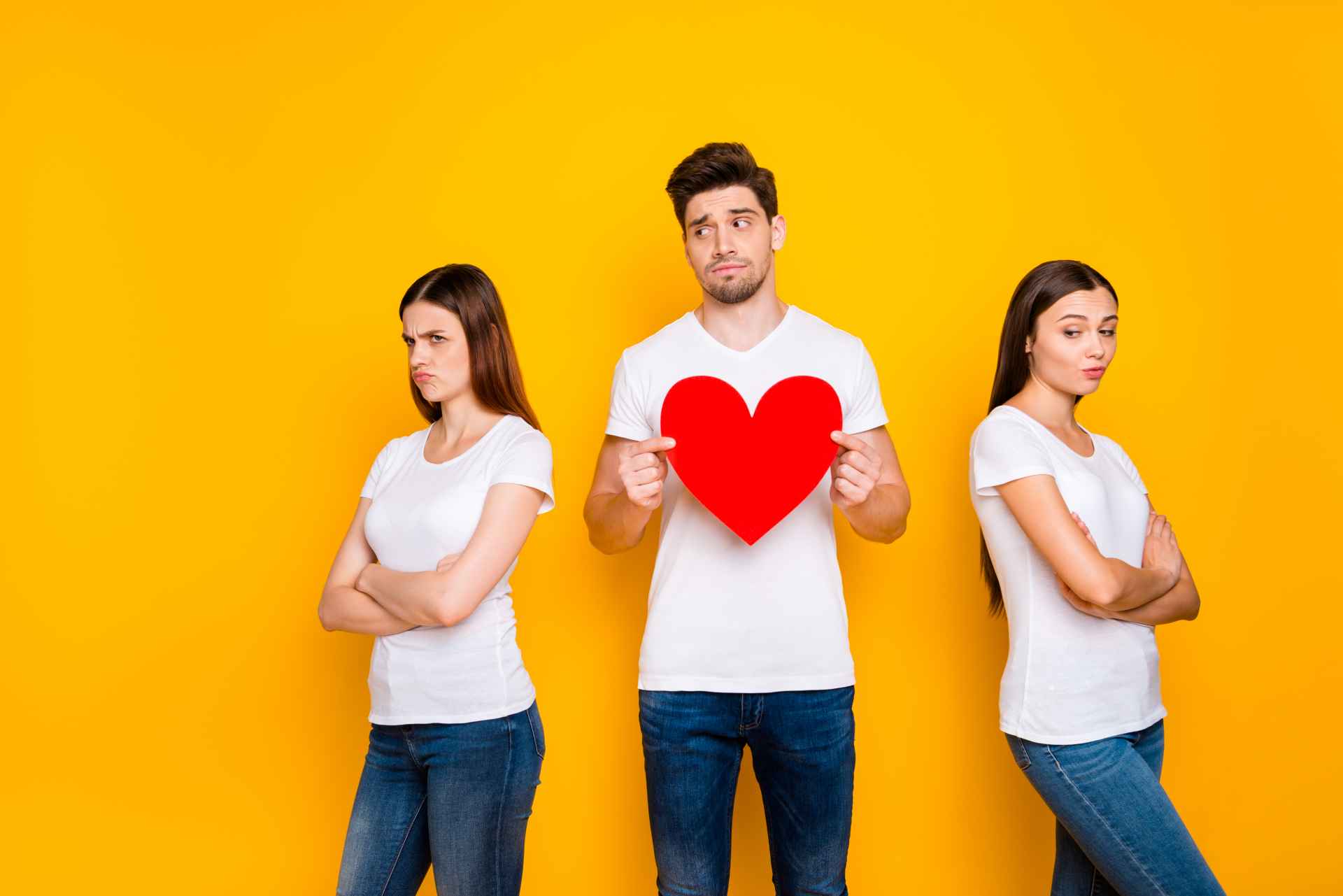 Nearly everybody I know who has experienced real problems in the polyamorous lifestyle (I’m including myself in this) has had the cornerstone of their issues be the Paradox of Polyamory, a cyclical problem that is incredibly difficult to work around. Those who manage to work around it are very successful at poly. Those who manage to avoid it entirely are gods amongst the rest of us and should be treated as such.

Because I really don’t like using overly simplistic examples for my essays like A&B&C, I’m going to make it only vaguely less simplistic by introducing Adam & Beth & Connie.

Adam and Beth are a happy couple exploring polyamory. Who wouldn’t be, after all? They’ve done some experimenting, had some dates, had the high highs of open relationships, and, aside from some bumps early on, it’s been pretty smooth sailing.

Doesn’t that sound nice? Don’t you want to know their OkCupid profile names?

Then Connie comes along.

But Connie’s not ominous in the least. She’s an incredibly understanding and open person. When she meets Adam, they hit it off immediately.

Again, let’s sidestep that ominous cliché by telling you that Adam, Beth, and Connie get along just fine, but the connection is between Adam and Connie. So here’s where the ball starts rolling, doesn’t it? There’s that little flaw. There’s some unexpected jealousy.

The compersion muscle kicks in, but the fact that we, in life, have very little reason to use this muscle regularly has left it… not great. Beth is happy for Adam and Connie, legitimately so, and she encourages the relationship. She really does mean it when she says that she just wants him to be happy.

The weak compersion muscle allows stray moments of jealousy to get through here and there. What if he’d rather spend time with her? We’ve been arguing about bills so much; lately, he doesn’t have to worry about that with her!

All of us, even those who’ve managed to achieve non-monogamy nirvana (non-mono-vana?) have experienced this feeling. I will call you a liar to your face if you tell me you haven’t.

And there’s the turning point, after all, when it all goes pear-shaped. The wheel in the sky has begun to turn, and many of us are helpless to do anything but watch it spin.

The pangs of jealousy that are coming through begin seep into Adam and Beth’s day-to-day life. Conversations become a bit more unhinged. The stress has descended. That already overworked compersion muscle collapses from fatigue more and more often. Strain can cause even the happiest of relationships to slide into chaos.

While this is happening, though, Adam is experiencing a respite when he’s with Connie. There’s no stress; there’re no bills to pay. He’s still experiencing the glory of New Relationship Energy as he navigates through this relationship.

These secondary relationships can be a sort of “vacation home” to escape to, a place devoid of the problems of their day-to-day life. This vacation home can reinforce a sort of delusion that, in this place, there are no problems.

Adam and Beth argue more frequently as the heat gets turned up on the relationship. Beth zeroes in on Connie as the cause of the trouble as, after all, it hadn’t been there before. With Connie to blame, the twisted logic goes to “cut out the cancer, save the host,” which is a very dark way of looking at it indeed. I chose those words carefully, because of how deeply this cycle can shove you down the rabbit hole. You’re desperate to save your relationship, and you can’t understand why it has gone askew.

Adam isn’t willing to cut the one sunshiney part out of his life, so he refuses to break up with her. He resents the request, assuming that Beth didn’t want his happiness after all. The relationship with Connie looks absurdly simple in comparison to the growing resentment and anger that lives at home. He starts to, in his weaker moments, wonder if he wouldn’t be happier breaking up with Beth and being with Connie full time.

Who hasn’t seen this spiral in themselves or in their circle of poly friends?

The paradox for Adam is that he has changed since pre-Connie. We aren’t static, after all. To go back would mean to change back, and he’s likely to have changed for the better in a number of ways. Also, to break up with Connie would dramatically hurt the very real person he was dating all this time. To break up with Beth instead would be an admission of defeat, when the relationship is just strained now. There is no good solution to the problem, just different levels of shit.

The paradox for Connie is that she’s getting fed a filtered version of what’s going on, so she can either believe everything Adam (who is processing through hurt) is feeling, or she can look objectively and risk hurting everyone. To leave would be the humane way to “save the host” but would also hurt both her and Adam. There is no good solution to this problem.

The paradox for Beth is the worst because it is the one that ramps up quickest. By not being the “supportive partner” in the poly relationship, she is directly contributing to the resentment Adam is feeling for her not being the “supportive partner.” She wants nothing more than for her compersion muscle to be strong, to endure this, to get back to the way things were. Asking Adam to leave Connie only reinforces her outsider status.

Being in this serious relationship means, perhaps, that their finances or living spaces are entwined to the point that she can’t eliminate some potential major sources of stress on account of being a human couple that exists in the world. Completely full-throttling her support for Adam and Connie’s relationship would mean driving down deep some of her most basic lizard brain reactions, potentially causing greater resentment if Adam doesn’t seem to sufficiently recognize her sacrifice.

Once the wheel starts spinning, the reactions get less and less logical. It’s like the carnival ride where you are stuck to the walls of the spinning wheel. You can move and lift your arms at the beginning, but the longer you are there, the more difficult it becomes to execute any type of change without the potential for great pain. So, it’s not a perfect metaphor. This is as dark as it gets for poly. Because the network of humans we bring into our lives add complexity, and complexity makes change more and more difficult.

Because you should be aware? I dunno. Because if you recognize these symptoms, you can try to counteract them. Because Adam could’ve tried not talking constantly about his new relationship. Because Beth could’ve relaxed a little and recognized how goofy new lovers make us feel. Because Connie, well, I didn’t really flesh out her side of the story, so let’s assume she was, in general, doing the best she could to make everybody happy without intruding into Beth’s life too much.

Because the real paradox of polyamory is that it offers these connections. The reason we connect to all these people is because of the vast richness that each new person can bring to our lives, filling spaces that weren’t filled before and helping to build the safety net beneath us, and the network of helping hands above us. That is the promise of poly, and what it can bring us. The paradox is what it can do to us, amplifying emotion when broadcast through the network.

It reminds us of the old adage that we all hate so very much: “If you love something, set it free.” Freedom breeds gratitude, which breeds happiness, which tones that compersion muscle that we all usually allow to atrophy. And then we may not be so frightened all the time.

Let your partners be free to explore, and be gentle to them as well.