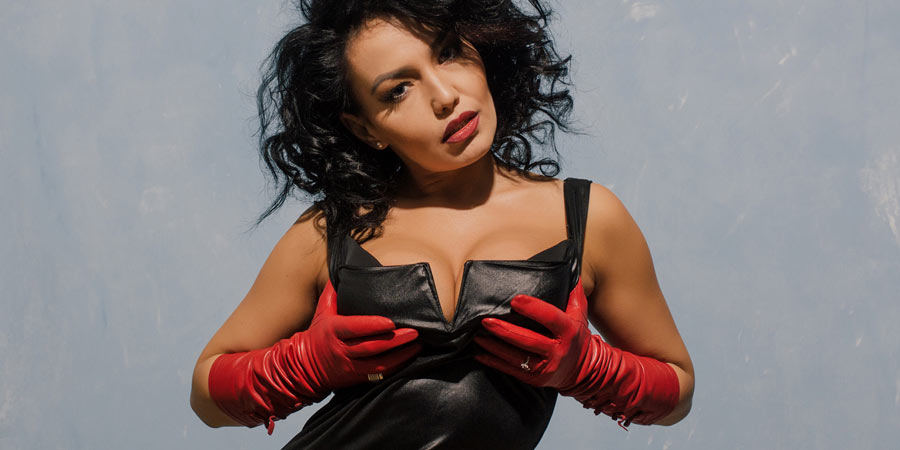 When we think of the femme domme, it’s often of the latex-clad, crop-wielding, stiletto-heeled beauty, staring steely-eyed down the barrel of the camera… (Don’t we?!) The look is all about power, but there’s no need to go to elaborate and expensive lengths to have it. The outfit can be as simple as lingerie and boots, or a favourite business suit and heels; the classic LBD and gloves (as pictured) is an accessible and affordable choice. You could also consider adding item/s you know your partner adores, but only if they give you a powerful thrill – do you like the way it completes or complements your look? Can you kinkify it for use during play? Will it make your partner drool in a way that makes you grin? Whatever you wear, step into it with confidence and enthusiasm and you’ll own it.

Many people – particularly women – have difficulties asking for what THEY want or need in everyday life. Playing with your dominant side gives you the opportunity to practice this skill in a safe, comfortable space. For those who struggle with asserting themselves, this can be a wonderful tool. When starting out, keep your desires simple, and mutual – this is roleplay, and not designed to push any boundaries.

The power of commands is more than having a service performed. The way the command is delivered – the tone of voice, the language used, the physical vicinity between Dominant and bottom – can add to a fuller experience. Feel free to play with different voices, and see what resonates with you. If in doubt, a clap, followed by a near-whisper is a general attention-grabber.

Aside from the sexualised body parts (genitals, bum, breasts) feet are the most fetishised part of the body. And of those who aren’t outright into feet, many have a shoe or stocking fetish. A wonderful place to start this play is with a foot bath or massage – it’s relatively easy to ask for (command) but if you’re truly into feet it’s mmmmagical to give or receive. And perhaps you could follow up that massage by resting your thoroughly loved feet on your human footstool?

For those who want to play with their more mischievous side, sensation play and foot tickling can be a bit evil, but has minimal risk of physical harm ie. no impact, broken skin. Keep in mind, tickling can be used for more than just childish shenanigans and some people just do not like it, or get to a point where they just can not take it, so as innocent as it may seem, ensure that this is something you’ve discussed with your submissive. And have a clear safe word.

This is a fairly common fantasy that’s already suggestive of a femme domme dynamic – after all, it’s the woman who is having all the fun while her poor old hubby watches on. The reality is that men are as hot (if not hotter) for cuckold play, be it helping a partner get ready for a date, hearing the resulting details, participating as a voyeur, or cleaning up after. Traditionally, cuckolding is considered to be a fairly humiliating form of play, and is still a tool used in HnD play. One of the reasons it remains a fantasy for many, is that the reality of introducing a third person is daunting – it should be. It’s serious business.

Teasing is a delightful way to play with power, and one in which the results are immediate. It’s also fairly safe ground on which to start exploring – it’s body safe, and doesn’t rely on tools or equipment, so you can play with physicality without feeling overwhelmed. In a sexual, or sensual scenario, teasing is used to play with levels of arousal, and can engage the full array of senses – a seductive dance, a quick whiff of shoe, a whispered word, nails scratching over a wrist, a quick taste of something sweet. But the fun doesn’t stop with the giving of sensations; it continues when you take those sensations away.

The tease is such a flexible form of play that adding other kinks happens fairly organically. Bondage and restraint are a beautiful complement to teasing, and teasing is a great introduction to edging and orgasm denial – two truly powerful forms of domination that ultimately control when and where someone orgasms.

Amongst men crossdressing is not an uncommon kink, but it does remain somewhat secretive. One way that men can invite their partners into this hidden kink is via feminisation play. This roleplay can be a great way for the femme to take a naturally dominant role (eg. hairdresser, stylist, shop assistant) while allowing their man to explore a feminine look or persona in a playful way. Like all kinks, there are varying degrees of engagement; some men simply enjoying wearing women’s knickers, others enjoy the grooming angle and wear make-up and wigs. Some do it all, and in six inch heels.

On the other hand, it’s often a desire of the dominant female to feminise a male partner – for some it’s all about the look, for others it’s about emasculation. Both reasons are valid, but it’s important the submissive agree to the intent of the feminisation, as much as the way the play occurs.

Copyright © 2021 MisKnickers It is illegal to use any or all of this article without the expressed, written permission from Adult Match Maker and the author. If you wish to use it you must publish the article in its entirety and include the original author, plus links, so that it is clear where the content originated. Failure to do so will result in legal action being taken.

The content posted on this blog is intended for informational purposes only and the opinions or views within each article are not intended to replace professional advice. If you require professional relationship or sexual health advice you should consult with an appropriately trained and qualified specialist.